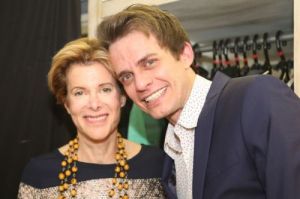 Last Wednesday (September 10th) in São Paulo premiered the original production of Man of La Mancha, a production from the company Atelier de Cultura that will run untill december of 2014. Landed in the city Abby Leigh, widow of composer of the show Mitch Leigh, to honor the production that has as leading role Cleto Baccic, Sara Sarres and Jorge Maya. She was really emotional after the show and insisted on greeting the actors who gave life to the characters and songs created by her husband. “It was fantastic! I was really emotioned when the orchestra started playing the overture” – said Abby to the press. “Baccic was a genuine Don Quixote and made me really impressed. He could be performing on Broadway!”.

Man of La Mancha opens to general public this saturday (September 13th), after 42 years of his first premier in Brazil directed by the famous Miguel Falabella (Hello Dolly, The Drowsy Chaperone, Hairspray, The Producers and many others).

Tip: tickets are free, all you have to do is maka a pre-reservation on the link http://www.sesisp.org.br/meu-sesi.